A Stradivari Violin Comes to Greensboro

Violins by Stradivari are known as some of the finest instruments in the world. Seeing and hearing one played in person is a rare event, often associated with major museums and big cities like New York, Paris, and London. But rather than travel to one of these locations, all one has to do is drive across town later this month to hear Dmitry Sitkovetsky play one of these priceless instruments. And Dima is not just playing “a” Stradivarius, he will be playing “his” Stradivarius. 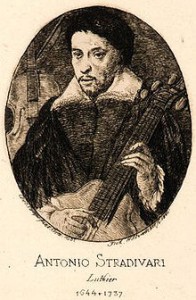 Sitkovetsky is a world-class violinist who needs a fine instrument to take advantage of his musical skill. For years, he played a Guarneri but then decided to look for a Strad. To acquire one of these rare instruments, one has to “put the word out” and wait patiently until one becomes available. Dima’s desires were answered in 1983 when he became the proud owner of a Stradivarius. Of course, such instruments are not inexpensive. Dima paid $300,000 for it 26 years ago, and estimates that it is worth approximately $4 million now. (If Wall Street would only do that well!)

The History of Sitkovetsky’s Strad

Only about 650 instruments made by Stradivari still exist, and many are named. The instrument Sitkovetsky purchased is the “Ex-Reiffenberg” Strad, referring to the previous owner. Dima believes his violin will be known at the “Ex-Sitkovetsky” as it is passed on to its next owner. But Reiffenberg was not the only musician who owned this instrument. Salvatore Accardo, Jaime Laredo, and Nathan Milstein have owned and played it as well, which gives this specific violin quite a remarkable pedigree.

To protect his instrument, Dima keeps it in a special safe with temperature and humidity controls in his home in London. And when he travels, he has certain hiding places for it. I did not ask where these were, and doubt that he would have told me anyway! 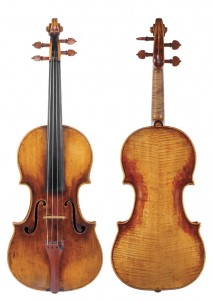 A Stradivari violin from 1725

Antonio Stradivari lived in Cremona, Italy from 1644 to 1737. Many theories of what makes his instruments so special exist. Some believe it is the wood around Cremona at that time. Others feel that the certain shellac creates the distinctive Stradivari sound. Some recent research even suggests that the pesticide used to keep worms out of the trees was part of the unique formula. Most experts agree that the violin maker made his finest instruments between 1698 and 1725. Dima’s instrument was made in 1717 making it an exceptional instrument even among Strads.

The relationship between Dima and his Strad has been a long and intimate one. When a virtuoso violinist acquires a great instrument, there is a period when the player learns the unique aspects of the instruments. But the violin also takes time to respond to the touch and bowing of the new owner. Sitkovetsky says, “It took two years for the instrument and me to understand one another. Now I’ve spent more time with it in the last 26 years than with any other human being, including my wife and daughter!”

50 Strads in Germany and 10 Painted Violins in Greensboro

The violin connoisseur wishing to see these miraculous instruments may wish to travel to Cologne, Germany in March. There, the Wallfraf Museum will present a special exhibition entitled “Stradivari – Myth and Music” where more than 50 Strads will be exhibited from March 5 through 21, 2010. Never have so many violins, violas, and cellos by the legendary master been displayed in a single exhibition. Of course, Dima’s violin will be one of those on exhibition, and he’ll have to play on a borrowed instrument for about three weeks.

Another collection of unique violins will be around Greensboro this fall. As a fund raiser for its tour of Austria and Germany in March and April 2010, the Greensboro Symphony Youth Orchestra will be raffling off ten violins (and one trombone!) that have been painted by local artists. They can be seen at the Greensboro Symphony’s concert on October 29th and First Friday at the Indie Market in November.  The drawing will be at the GSYO’s concert at Greensboro Day School at 4 p.m. on December 6. Raffle tickets are $5 each or 7 for $25. You can’t get a Strad for that!

This article originally appeared in Greensboro, North Carolina’s News and Record on October 10, 2009.