The Story of Silent Night: Joseph Mohr and Franz Gruber

The world’s most beloved Christmas Carol, Silent Night, comes from the small Austrian village of Oberndorf, just north of Salzburg. On Christmas Eve, 1818, the congregation of St. Nicholas Church heard the first performance of this wonderful music. Since then, Silent Night was been translated into hundreds of languages and sung and played in every corner of the globe. This series of five blogs tells its story. 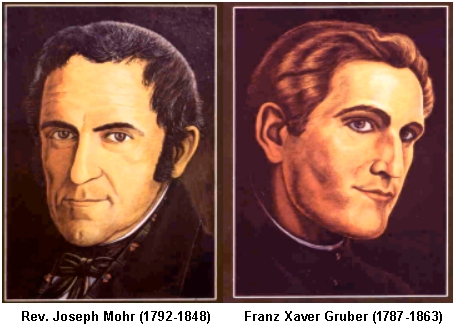 Silent Night was the collaboration of two good friends. Joseph Mohr, who wrote the text, was the young parish priest at St. Nicholas Church, and Franz Xaver Gruber, who composed the music, was a local school teacher and the church organist. Here is how they got to Oberndorf.

Joseph Mohr was born on December 11, 1792 and baptized in the Salzburg’s famous Cathedral a few hours later. For years his birth home was thought to be Steingasse 9, but in 1998, a historian determined that the actual birth house was on the site of today’s Steingasse 31. Unfortunately visiting these sites today is problematic: the actual birth house was destroyed in World War II and there is still a memorial plaque at the wrong address! 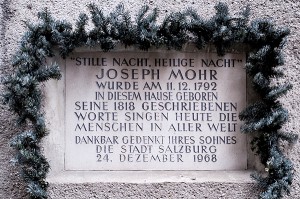 For 206 years, people thought Joseph Mohr was born in the building where this plaque hangs. He was actually born about one hundred meters away.

The future priest’s childhood was not a happy one. His father, Franz, was a soldier in the army of the prince-archbishop of Salzburg and was away from home most of the time. His mother, Anna Schoiber, was quite poor, and Joseph was the third child that she had out-of-wedlock. Even his godfather was not a happy figure in the child’s life because he was Salzburg’s executioner!

Life only began to improve for the child when the cathedral’s curate took Joseph as a foster child. The boy showed an affinity for music and began to sing in the choirs of St. Peter’s Church and the University Church. As he grew, Mohr continued to flourish, first as a student at a well-known grammar school in Kremsmüster in Upper Austria, and later the archiepiscopal seminar in Salzburg. His ordination was on August 21, 1815, and one of his first posts was at Oberndorf from 1817 to 1819. There he met Franz Gruber.

You can visit Salzburg and see the Sound of Music sites on In Mozart’s Footsteps trip to Vienna and Salzburg on May 24-June 2, 2013. Click here for more information.

The altar of St. Peter’s Church in Salzburg

Gruber was born on November 25, 1787 in the village of Unterweizberg in Bavaria near the beginning of the Salzach River. His father was a poor weaver who believed his son should learn a useful trade and resisted young Franz’s desire to learn music. This did not deter the boy, who, unbeknownst to his father, took violin lessons and also helped the organist at his church. When the father finally heard Franz’s organ playing, he relented and allowed his son to study to be a teacher. In 1807, Franz became schoolmaster and organist in the town of Arnsdorf, near Oberndorf, and in 1816 he became the organist in at St. Nicholas Church. The two principal figures of Silent Night were now in the same town.

next: The Origin of the Hymn