Visiting the Sites of Silent Night 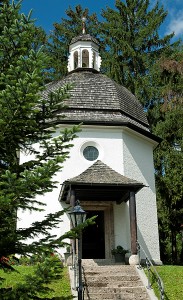 Unfortunately, St. Nicholas Church, where Silent Night was first performed in 1818, was torn down in 1906 because of repeated flood damage. Today, the most important Silent Night site to see is the Silent Night Memorial Chapel in Oberndorf, which stands on the site of the original church. (Thankfully, the location has been built up to avoid more flood damage!)

The intimate Memorial Chapel was built in 1924-1937, and contains a beautiful wooden altar and stained glass windows dedicated to the Mohr and Gruber. Every year on December 24th, the surrounding area is lit with hundreds of candles and people from many lands come here to sing and celebrate this wonderful hymn.

Next to the chapel is Oberndorf’s Silent Night and Local History Museum. In addition to presenting the history of the hymn, the museum also has exhibits regarding the history of Oberndorf, its important role in the shipping of salt, and the philosopher and economist Leopold Kohr.

The stained glass window dedicated to Franz Gruber in the chapel in Oberndorf. An image of St. Nicholas Church is in the bottom half.

Steingasse 31 in Salzburg. The site of  Mohr’s birth.

The Franz Xaver Gruber Museum in Arnsdorf is located in the school building where Gruber lived and taught. You can visit his living space and classroom. This is the oldest school building in Austria that is still in use.

The village of Wagrain has several sites relating to Mohr’s life. One can visit his grave, the church where he played the organ, an elementary school that he built, and an exhibition about him in the Waggerl Haus.