Even after Silent Night had become well known in Europe, no one knew who composed it. Authorities in Berlin began to search its creator, and contacted the Benedictine Monastery in Salzburg. Franz Gruber was contacted and wrote the following document to finally verify that he and Joseph Mohr had written the famous hymn. This is the only statement about the Christmas carol to come from either Gruber or Mohr. Gruber probably wrote it quickly, and spent more time talking about himself than about his collaborator!

Authentic Reason for the Composition of the Christmas Song “Silent Night, Holy Night!”

On December 24th in the year 1818 the curate of the newly erected parish-church St. Nicola of Oberndorf, Mr. Joseph Mohr handed over a poem to the deputy organist, Franz Gruber (at that time also teacher at Arnsdorf) with the request to compose a suitable melody for two solo voices with choir and the accompaniment of one guitar.

The latter handed his simple composition over to the musically trained clergyman as requested – an exact copy of the original is attached hereto – his composition was produced immediately on Christmas Eve with great applause.

Mr. Joseph Mohr, the originator of this, and other spiritual poems, died on December 4, 1848, the worthy vicar at Wagrain in Pongau.

Franz Gruber, at present choir-conductor and organist at the parish-church of Hallein, who is the third son of a poor linen-weaver, born at Hochburg in the year 1787; after leaving the weaver’s loom was apprenticed at the age of 18 to H. Georg Hartdobler, who was parish-organist at Burghausen. After only three months study he attained such proficiency to be able to play the organ at high mass.

In the year 1806 he switched over to teaching and was employed as teacher and curate the following year at the school of Arnsdorf. From there, after the separation due to territorial changes of the suburb of Oberndorf from the town of Laufen, with the approval of his superiors he took up the organist and choir duties at St. Nicola until the year 1829, when he was promoted to the position of a schoolteacher of Berndorf.

In the year 1833, a vacancy for a choir-conductor and organist at the parish-church of Hallein was offered to him, which he accepted. Two sons and two daughters of his twelve legitimate children are still alive, all of whom have had a musical education. The eldest son, who is employed as teacher at the royal high school of Hallein has already submitted several successful compositions.

In view of the fact that this Christmas song had reached the Tyrol first by means of a well known man from Zillertal and has appeared since then in a slightly different form in a collection of songs at Leipzig; the originator considers it a favor to be able to enclose the song in its original version.

next: Visiting the Sites of ‘Silent Night’
previous: Spreading the Hymn to the World 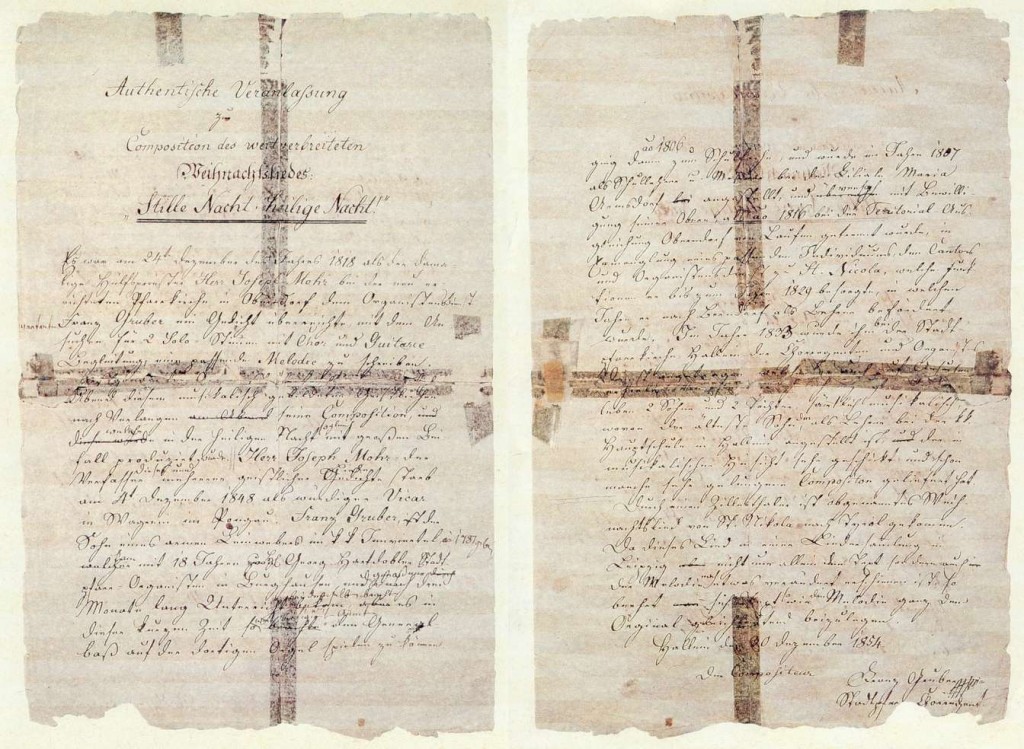