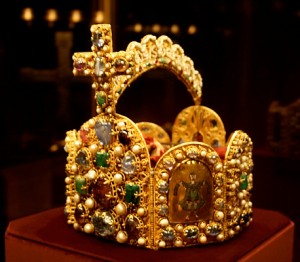 One of the priceless crowns in the Imperial Treasury

When you travel with In Mozart’s Footsteps, you will experience more than just music. We will have guided tours of each city led by a local guide, and you will also have the opportunity to visit places that you are interested in during free time.

This history of Vienna is spectacular. The city was the home of the Hapsburgs and Holy Roman Empire. The Emperors and Empresses liked their lavish accommodations, which means that there are many impressive structures available for visitors to explore. The Hofburg was the Hapsburgs city home. Today it houses several museums: Imperial Apartments, Treasury (jewels of the Holy Roman Empire), Empress Sissi Museum, Hofkapelle (where the Vienna Boys Choir sings Sunday Mass), Folk Museum, Ephesus Museum, Collection of Weapons and Armor, and the Collection of Ancient Musical Instruments.

The summer home of the Hapsburgs was Schonbrunn Palace, the second largest in Europe with 1400 rooms. Tours of this sumptuous building are very popular with visitors. On the grounds are a wonderful garden and excellent zoo. 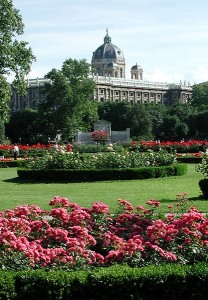 Of course, art museums abound, containing art from traditional to contemporary artists. The Art History Museum (Kunsthistorisches) is world famous and features the largest collection of Bruegels outside of the Netherlands. (These were favorite works of Emperor Rudolf II.) The Museum Quarter features several museums showcasing different periods.

History Museums are a natural in a city with such a long and distinguished history. The largest, the Museum of Natural History, is across from the Art History Museum. The Museum of Military History documents the wars throughout the reign of the Austro-Hungarian Empire, and has the car in which Prince Franz Ferdinand was shot in Belgrade, starting a sequence of events that led to World War I. The Vienna Museum, formerly known as the Museum of the City of Vienna, is also well worth a visit.

Smaller museums are found throughout the city. One is even dedicated to the popular film, The Third Man. 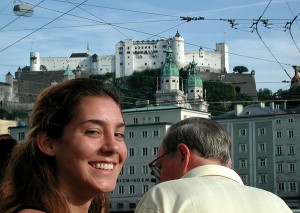 Jamie with the Salzburg Fortress in the background

Salzburg has several wonderful museums. The Carolino Museum and Residence showcase this city’s history, and the visitor can also visit several wonderful art museums and galleries. The Modern Art Museum is high above Salzburg, with a spectacular view of Mozart’s hometown.

But the non-musical highlight of Salzburg is the remarkable Fortress perched high above the city. Everywhere you walk in the city, you can look up and see this historic structure overlooking the old town. To get up to it, the intrepid visitor can walk a steep path, or the smarter traveler can take the vernicular railway. (In his younger days, Dr. Nelson walked it, but he’s now one of the “smarter” travelers!) 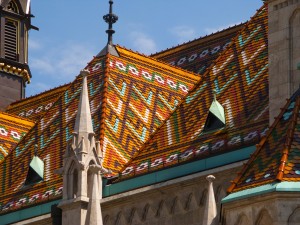 Budapest has two distinctly different sides with the Danube River separating them. The hilly, Buda side is dominated by the Castle and the Matyas Church, while the flatter, Pest side has the magnificent Parliament. Picturesque bridges connect the two.