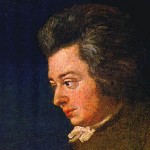 Wolfgang Amadeus Mozart (1756-1791) traveled so extensively as both a child and an adult that almost wherever we go, we find places he lived or worked. In Salzburg, we visit his childhood homes and stroll on the streets where the talented youngster grew up. He visited Vienna three times as a youth, then lived there for the last decade of his life, and he made several important trips to Prague in his later years.

Some Historical Mozart Sites in Salzburg 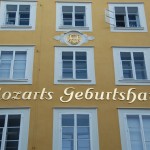 Birth House Museum. We will stand in the room where Mozart was born on January 27, 1756. The museum traces the family history and life in Salzburg during Mozart’s time. Visitors also experience how different operas were staged, and see some of the composer’s most important keyboards and portraits. 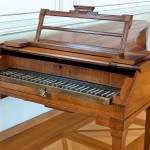 Mozart’s Apartment Museum in Salzburg. This is the larger residence that the family moved into when Wolfgang was a teenager. Visitors see four original and historic keyboards, the famous family portrait painted shortly after Mozart’s mother had died, and facsimiles of letters and other important documents. The final room has an excellent movie detailing Mozart’s Salzburg years. 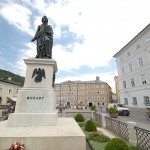 Statue at Mozartplatz. Erected in 1844, this was the first monument dedicated to the great composer. The perimeter of the square holds the delicious Demel pastry shop, the Salzburg Museum, and the final building where Mozart’s wife Constanza lived. Our hotel in Salzburg is right around the corner. 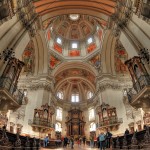 Salzburg Cathedral. Mozart was baptized here in a baptismal font that is just to the left upon entering the church. This magnificent church in the very center of Salzburg dates from 774, with further renovations done in 1628 and 1959. 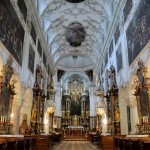 St. Peter’s Church. The first performance of Mozart’s C Minor Mass was performed in this beautiful Baroque church on October 26, 1783, and every summer the Salzburg Festival performs it here as well. Dr. Nelson has attended one – it was wonderful! 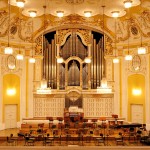 Mozarteum Conservatory and Research Center. The Mozarteum was the first center dedicated to the study of Mozart and his music. Today it is also an internationally known music conservatory. The concert hall (left) is Salzburg’s most beautiful performance venue. 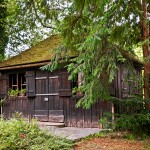 Little Magic Flute House. When Mozart was procrastinating on finishing “The Magic Flute”, impresario Emanuel Schikaneder literally took Mozart and put him into this little house (then in Vienna) and told him to finish the opera. Mozart did not stay there continuously, of course, but he did get the work finished. It is on the grounds of the Mozarteum. 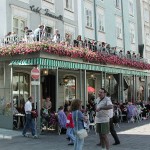 Cafe Tomaselli. This cafe has been in existence since Mozart’s time, and he mentioned going there in several of his letters. It is a very popular place to enjoy coffee and some delicious cakes and pastries. 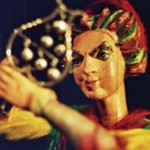 Salzburg Marionette Theater. The world’s best known marionette theater performs many operas by Mozart. “The Magic Flute” is their specialty; their performance is truly magical (no pun intended). 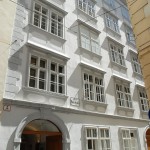 Mozarthaus Vienna. Directly behind St. Stephen’s Cathedral is this three-story museum where Mozart lived from 1784 to 1787. When we visit, we stand in the room where Mozart and Beethoven met, and where Haydn told Mozart’s father “your son is the greatest composer I know in person or by name”. It is a great museum. 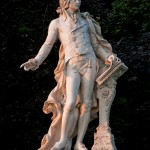 Mozart Statue in the Burggarten. This is one of the famous images of Vienna. It was erected in 1898 and moved to its current location in 1953. Vienna’s love of Mozart is seen in the monument’s prominent location just next to the Hofburg complex. 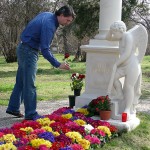 St. Mark’s Cemetery. Where Mozart was buried in an anonymous grave shortly after his death on December 5, 1791. The moving monument of a crying angel is a fitting tribute to the composer who died at the young age of 35. 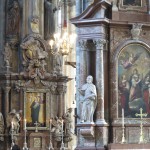 St. Stephen’s Cathedral. This huge cathedral in the very center of Vienna was the site of Mozart’s marriage to Constanze and is also where his memorial service has held on that cold day in December 1791. 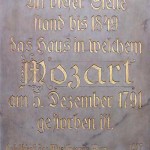 Rauhensteingasse. The location of Mozart’s final apartment, and the site where he died. Today a modern department store occupies that address.

Some Historical Mozart Sites in Prague

Estates Theater. The picturesque theater where the premieres of “Don Giovanni”, “La Clemenza di Tito”, “Prague” Symphony, and the Clarinet Concerto took place. The performance scenes of “Amadeus” were filmed there. Our trips attend performances here whenever we can. 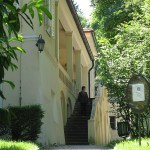 Bertramka. A lovely estate on the outskirts of Prague where the Duschek family lived. Mozart stayed here while in Prague and it was here that he supposedly finished the overture to “Don Giovanni” hours before its premiere. 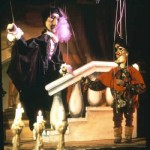