History of the Salzburg Festival 5, the maturation of the festival from the end of World War II to today

In Part 4 of this series, we learned about the growth of the festival starting in 1925, and the changes brought about during the Nazi years. In Part 5, we learn about superstar conductors and further changes that brought the festival to where it is today. 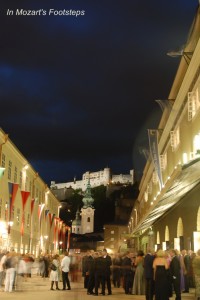 Intermission at a performance of the Salzburg Festival today

Rebuilding the festival after the war
Following the war, the event became a Festival once again. In the rebuilding process, several new directions were important to the organizers. More performances of contemporary music and opera were desired, opera productions unique to Salzburg (and not just imports from Vienna) should take place, and recapturing a true Mozart style was envisioned. Wilhelm Furtwängler was the dominant conductor and Karl Böhm also conducted to great reviews. But the productions of newer operas failed to draw a large public. Berg’s Wozzeck, von Einem’s Der Prozess, and Barber’s Vanessa were just three operas that did not sell many tickets.

Herbert von Karajan
When Furtwängler died in 1954, Herbert von Karajan was ready to take leadership of the festival. He was not only a podium star – at times being the director of six important positions at once – but was also a great impresario and visionary. The Salzburg native realized that times had changed and that audiences were more sophisticated. He conducted first rate operatic performances with stellar casts and interesting productions. He also proposed an ingenious plan of having four of the five important Mozart operas in the repertoire at all times, with each having a new production every five years. Karajan also began to invite international orchestras, starting with “his” Berlin Philharmonic, to perform. The audience reaction, not to mention the effect of ticket sales, was extremely positive. 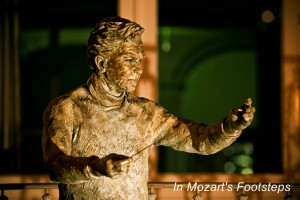 Statue of Karajan next to the Makart Bridge. He was born in Salzburg in 1908.

Karajan made the festival his own. He demanded total control over the operatic casts and all conductors for both operas and concerts. The maestro also greatly restricted the amount of contemporary music at the festival which caused higher percentages of tickets to be sold, but caught the ire of many critics who called the programming too conservative. Perhaps the largest development (literally) of the Karajan era was the construction of the new Festival Hall. Its immense proportions made it only suitable for grand opera and large orchestral concerts, the music Karajan wanted to conduct. Much like his control over choosing the performers, he would only let others conduct opera in the new hall with his permission. As stated in an obituary after his death in 1989, Karajan was “the last absolutist ruler”.

The festival after Karajan
A huge change occurred in the Salzburg Festival when Gerald Mortier took over in 1990. He declared that “A New Salzburg” had begun, one that encouraged more contemporary music, provocative productions, and a younger audience. New stage directors, such as Peter Sellars and Robert Wilson, found Salzburg ready to accept their new ideas in operatic design. Operas by Janácek, Messiaen, and Ligeti were performed alongside of Mozart. He was the right person to break out of what some had considered the stagnation of the festival during the last years of Karajan.

Peter Ruzicka took over in 2002 and immediately started looking to 2006, the 250th anniversary of Mozart’s birth. The massive undertaking of staging all 22 of the master’s operas in the anniversary year was a huge success. These years also saw many world premieres, honored Richard Strauss for his role in founding the festival, and featured works by the lesser-known Austrian composers Korngold, Zemlinsky, and Schreker.

Since that time, the festival has continued to grow and thrive. For the music lover, attending the festival is a treat not to be missed.

This entry was posted in Salzburg's Musical History, Uncategorized. Bookmark the permalink.