I led the students on my favorite part of the trip itinerary on Tuesday in Vienna. We take public transportation to the northernmost district of the city, right on the edge of the Vienna Woods. The village of Heiligenstadt is here, and this is where Beethoven spent several important summers.

We always start at the famous statue in Heiligenstadt Park. This is not only a wonderful statue – I used a picture of it for the cover of my book – but it is also a popular photo opportunity for pictures with Beethoven. 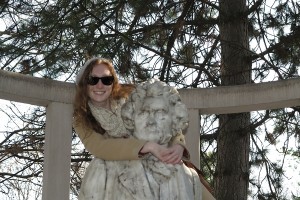 Heiligenstadt was where Beethoven realized that his deafness would not improve. As a result of this, he wrote an impassioned letter to his brother (only to be read after the composer’s death) that has become known as the Heiligenstadt Testament. We were on the site where he wrote this.

Our walk continued along the Beethovenweg (Beethoven Walkway), where he would walk for inspiration. The little stream that we walked along was the “Scene by the Brook” in his Sixth Symphony. One goes here and music history really comes alive. 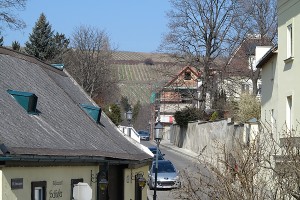 The hills and vineyards of the Vienna Woods.

This entry was posted in Trip Blogs, Vienna's Musical History. Bookmark the permalink.