Thursday morning was spent on our chartered bus for the four-hour trip to Prague. About halfway there, it started snowing and pretty soon there were a couple of inches on the ground. Fortunately the snow stopped by the time we arrived, but unfortunately, the afternoon still had a light rain. 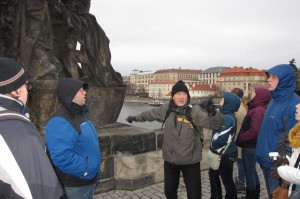 Milos talking to the group on the Charles Bridge

After lunch in our hotel, we met our guide, Milos. He was incredibly enthusiastic about everything Czech, especially the music. Our walking tour took us in all sorts of little alleys and tiny streets – it was fascinating, but most of us had no idea where we were. That goes for me, too, and I have been there quite a few times. 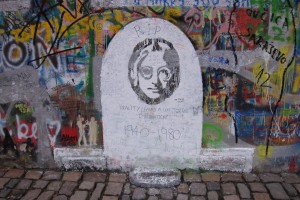 The highlights of the tour were the Charles Bridge and what is known as the “John Lennon Wall” on the west side of the Vltava River. The Czechs were among the first to create a monument to the slain Beatle, and many locals have used this wall to write their political slogans and commentary since that time.

That evening, some of us went to dinner at an authentic restaurant that was one of the first to sell Budvar (the Czech Budweiser, not the American Budweiser), and some attended a performance of Mozart’s “Abduction from the Seraglio” at the Estates Theater. This opera house is where Mozart conducted the first performance of his “Don Giovanni” and other works. It is also where the opera scenes from “Amadeus” were filmed.