Sometimes pieces of music are meant to entertain an audience. Sometimes they are meant to celebrate an occasion or welcome dignitaries to an event. Sometimes music is written just to get people’s attention. And sometimes a piece of music is designed to send a message in subtle – or not so subtle – ways. That is the case with Haydn’s Symphony No. 45, known as the “Farewell”. 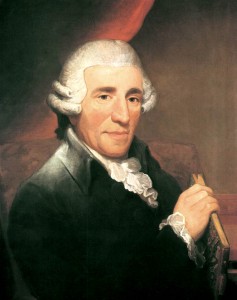 Franz Josef Haydn was the composer and “Kapellmeister” for the wealthy Esterházy family near Vienna. This was one of the great musical jobs in Europe because his primary responsibility was to compose music for Prince Nicholas Esterházy for a variety of events or even just for the Prince’s pleasure. And Haydn had an orchestra and opera company at his disposal just for these purposes. Composers today should be so fortunate.

Two Palaces for One Family

The Esterhazy’s primary residence was a sumptuous palace in Eisenstadt which has a beautiful concert hall that is still used today. This picturesque Austrian town was where the musicians – employees of the Prince – lived with their families. Prince Nicholas was an avid hunter, and apparently the hunting was not good enough near Eisenstadt for his liking. So, in 1772, he had another palace built hear his hunting lodge in the little town of Fertöd, Hungary. He named it Esterháza.

In the warm summer months, everyone who worked in Esterházy Palace packed up and moved to Esterháza. This included the musicians. But only a few of them, Haydn included, were allowed to take their wives and families with them. This was usually fine with the members of the orchestra because the Prince only stayed at Esterháza for a short time. However, in 1772, the Prince decided to stay longer in Hungary than usual. Of course, this was not a popular decision to the orchestra members, but they were powerless to do anything about it themselves. If something like this happened today, the musician’s union would certainly raise a fuss.

The married men, wanting to return to their wives, asked Haydn if he could help. The great composer, being a true diplomat, did not want to confront the Prince, but he came up with another idea that (he hoped) would get Nicholas’s attention. Haydn would use his music to strongly hint that the musicians wanted to return home.

When it came time to perform his new symphony, the fast first movement went along without a hitch. Then the slow second movement and dance-like third movement, a minuet, followed. The finale started as did most final movements of the day, fast and lively. But a few minutes into the last movement, just when the audience was expecting the work to wind to a close, a slower section began. Prince Nicholas was quite knowledgeable about music, so this must have attracted his attention. What was this about? Why is there slow music here? 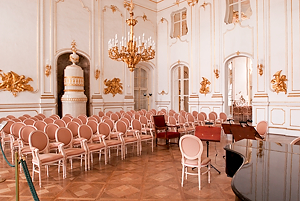 The room in Esterháza Palace where the "Farewell" Symphony was first performed.

What the Prince then saw was remarkable. As the fourth movement progressed, a few musicians stopped playing, blew out the candles on their music stands, took their music, and left the stage. Then more stopped and exited the room. This continued until only two violinists were left, and when they stopped, they too blew out their candles and left. Whereas most symphonies end with lots of energy and sound, Haydn had written this work so that it gradually tapered out into thin air.

The Prince understood Haydn’s message. The next day, he gave the order for the musicians to return to Eisenstadt.

It was not until a hundred years later that the name “Farewell” was associated with this symphony, and it is hard to imagine a more fitting title for the work.