Dima Sitkovetski is a world class musician who is continually on the move. When he’s not conducting in Greensboro, he may be rehearsing in New York, playing a recital in Paris, or staying at his home in London practicing for his next engagement. So what does he do during the several weeks a year he is in Greensboro preparing for the Symphony Concerts and Chamber Music Series? Recently, I had the chance to discuss this with the maestro. 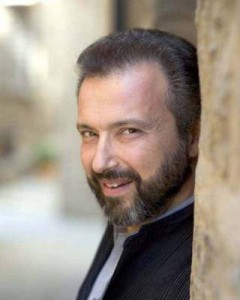 “Normally, people think a conductor just comes in for rehearsals, and maybe a board meeting, and that’s it. There is a lot more.” A typically busy week for Dima includes teaching classes to students in the community, meeting with donors and other friends of the orchestra, planning concerts for future years, and finding some time to relax. Of course, the main reason he is here is to rehearse and perform as the conductor of the orchestra and as a chamber musician. 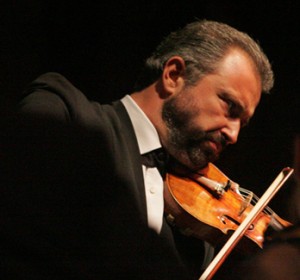 The educational aspect of his Greensboro weeks is especially special for Sitkovetski. He described some of these activities. “Just today I taught a class and talked to students at the Weaver Academy. And then I went to UNCG and conducted a rehearsal with their fine orchestra. We worked on Respighi’s “The Pines of Rome. In my role as Distinguished Visiting Professor at the UNCG School of Music, I do many things like working with conducting students, teaching violin master classes, and talking about how to build a career in music.”

One way he interacted with the community was on a recent Sunday when he spent three hours playing fifteen simultaneous games of chess. Is the maestro as comfortable behind a chess board as he is on the podium? “I’m an OK player. I won all but one, that that game was a draw.”

Even many of his social activities have an important outreach function beyond just having fun. “Those things are all important. Of course, you can do lots of things with email, but it’s always good to be with people in person.”

Next to his primary residence in London, Greensboro has truly become his second home. The international nature of his schedule is such that he actually spends about the same about of time here as he does in London.  “I’m never really home more than two or two and a half months combined. When I’m in London, I usually don’t work. Here, I always work.” 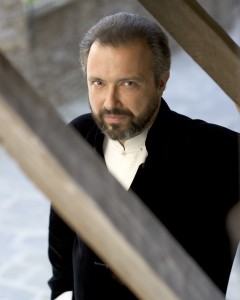 A Few Minutes to Relax

With such a varied and busy schedule while in Greensboro, Dima needs a few precious minutes for relaxation. “Every day I need some quiet time just by myself either in my apartment or when I go on walks. There are a lot of outgoing activities like rehearsals or classes. So I need the time to reflect. Exercise is also important so I try to walk as much as possible. Movies are always fun for me, and I have already seen one film there this trip [after three days in Greensboro]. And there was a nice Russian party this time. The social times are important, too.”

For each series of concerts, the maestro is usually in Greensboro for about ten days. These days are packed to the rim with a myriad of activities, culminating with magnificent orchestral concerts and sophisticated chamber music performances. He ended our interview with how it felt at the end of one of these weeks. “I’m always tired, but if the musical result was good, if we accomplished great things, and if we had a good turnout at the concerts, then I’m very satisfied. It’s a very good reason to be tired.”

This article originally appeared in Greensboro, North Carolina’s News and Record on October 4, 2009.

This entry was posted in Greensboro Symphony Classical Concerts. Bookmark the permalink.