With the focus on London’s Olympics these days, and also of the current presidential campaign, I was reminded of a great piece of music whose first performance was on the Thames almost 300 years ago.

In 1717, King George’s popularity with the British population had declined. In an attempt to rectify this, his advisors thought that a large-scale spectacle was needed, and they suggested a huge boating event on the Thames River. Of course, music was needed for the “river party”, and the court composer, George Frederic Handel, was asked to compose the festive music.

On July 17, the King was on the Royal Barge with an assortment of Dukes and Duchesses, Counts and Countesses, Earls and other noblemen. A barge owned by the City of London held Handel and fifty musicians. The public must have totally embraced the idea because the number of boats on the river that summer day were “beyond counting” according to one participant.

A Long Day of Performing 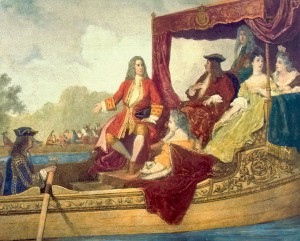 Handel (left) with King George on the Royal Barge on the day in 1717 when the “Water Music” was first performed.

Handel wrote the music in three parts, with the entire piece lasting more than an hour. The musicians played the music as the barges moved from Whitehall where the festivities started, to Chelsea where dinner was served. After the King and his party finished dining, the barges reversed direction and returned to Whitehall with the musicians continuing to perform this newly composed music.

The music was very popular with the King. A local newspaper, the Daily Courant, reported that George “liked so well, that he caus’d it to be plaid over three times in going and returning”. Some scholars believe that it was played three times each way, making for more than six hours of performing for the musicians sitting on moving barges in the July heat. I doubt the musician’s union would allow for that these days.