Felix Mendelssohn, known as Felix Mendelssohn Bartholdy in his native Germany, only lived 38 years. His musical abilities were recognized as a young child, and he was even called “an heir to Mozart”. Even in his short life, his output was prodigious: five symphonies and other orchestral music, concertos (notable his Violin Concerto), chamber music, choral works, songs, and keyboard music. His premature death is one of the tragedies in music.

Between 1829 and 1831, Mendelssohn undertook a tour of Europe, which turned out to be the inspirations for several of his pieces. His third symphony is subtitled “Scottish” and “The Hebrides” refers to islands of the coast of Scotland, and the fourth symphony, performed tonight, is subtitled the “Italian”.  His excitement about this country is apparent in a letter: “This is Italy! And now has begun what I have always thought.. to be the supreme joy in life. And I am loving it.” 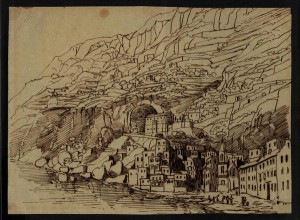 The composer began the symphony during that trip, but did not finish it until 1833 when he was in Berlin. Around that time, Mendelssohn received an invitation to compose for the London  Philharmonic Society, so the first performance was an international tour de force: a symphony by a German composer, with an Italian inspiration, in an English concert hall! The date was May 13, 1833.

The bubbling melodies and perpetual rhythmic drive has made Mendelssohn’s Fourth Symphony extremely popular and often performed. The composer knew that he had captured the liveliness of the Italian spirit even as the piece was just taking shape. During his trip, he wrote to his musical sister: “The ‘Italian’ symphony is making great progress. It will be the jolliest piece I have ever done, especially the last movement.”