“On the Beautiful Blue Danube” by Johann Strauss, Jr.

On the Beautiful Blue Danube is one of the world’s most beloved pieces of music. Its charm has delighted listeners for more than a century. But, for all its wonder, it had a rather unusual beginning. 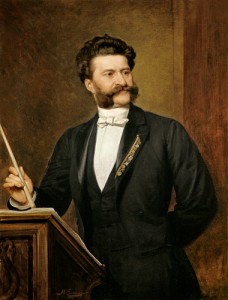 In the 1860’s, Strauss was in great demand. He performed nearly every night, and was frequently asked to compose for particular ensemble or event. One such request was by Johann Herbeck, who requested a choral waltz for the Männergesangsverein (Men’s Singing Society). A waltz for chorus? That would be new for Strauss. (He would eventually write none dances for chorus.)

Austria had just suffered a military defeat by the Prussians at Koeniggräetz. The Viennese were dejected. The new waltz attempted to raise people’s spirits by reminding them of the Fasching (Carnival). The text was written by Josef Weyl, a policeman who sang in the chorus. Although Weyl had great intentions, the verse was less than inspired. In fact, the choir almost revolted because of the inane lyrics! 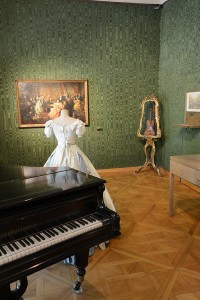 Johann Strauss, Jr. composed the “Blue Danube” Waltz in this apartment. It is now a museum.

Strauss added the title at the very last minute. It was from a poem by Karl Beck with the line “one the Danube, the beautiful blue Danube.”Apparently the composer was also behind on the piano part. When he gave the music to Herbeck, he attached the note

Please excuse the poor and untidy handwriting.  I was obliged to get it finished within a few minutes. Johann Strauss.

The first performance was on February 15, 1867 at the Diana Ballroom (no longer standing). Because of an imperial ball, Strauss and his orchestra could not attend. So the first performance of this masterpiece was by lesser known musicians: Rudolf Weinwurm and the ‘König von Hannover’ Infantry Regiment, along with the Men’s Singing Society.

The popular legend is that the public’s reaction was lukewarm. We know that the new piece was only repeated once, which was nearly a failure by Strauss’ standards. When he learned about the singular encore, the waltz king said that it “was probably not catchy enough.”

But the Viennese newspapers had a different opinion. On February 17, they printed:

“The lovely waltz, with its catchy rhythms, ought soon to belong among the most popular of the prolific dance composer”

“Hofballmusik-Direktor Strauss celebrated a great and deserved triumph with his waltz An der schönen blauen Donau . . . ”

“The waltz was truly splendid . . . The composition was received with rejoicing, and had to be repeated by tempestuous general demand.” 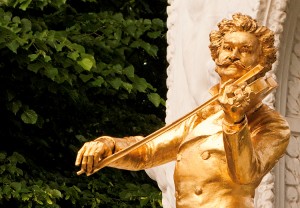 The famous golden statue of Strauss in Vienna’s Stadtpark.

That summer, Strauss performed at the World Exposition in Paris. He had almost forgotten about the waltz, but one night decided to play it. The music war heard without words for the first time.  The Parisians loved it! They could not get enough of the Blue Danube. They even came up with their own (superior!) words

Stream of blue
On your pure waves
Glides the Sail
Like a star.

The waltz was still not yet complete. It was not until the following year that Strauss added the long introduction and the code (ending) that we all now recognize. Since that time, the popularity and importance of the Blue Danube has grown in leaps and bounds.

Two anecdotes attest to the greatness of this piece.

Strauss’ wife, Adele, once asked Brahms for an autograph.(Brahms loved Strauss’ music.)  The revered composer wrote the first few bars of Blue Danube and then signed, “Unfortunately not by – Johannes Brahms.”

Perhaps the most fitting tribute came from Eduard Hanslick, the dean of Viennese music critics. In 1872, he wrote:

Alongside the National Anthem by Father Haydn, which celebrates the Emperor and the Imperial Household, we have another National Anthem, Strauss’ Beautiful Blue Danube, which sings of our land and people. 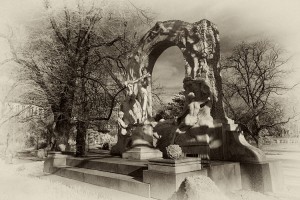 An Infrared photo of the Strauss statue by David Nelson.

This entry was posted in Vienna's Musical History. Bookmark the permalink.

One Response to “On the Beautiful Blue Danube” by Johann Strauss, Jr.