The Many Hats of Emanuel Ax 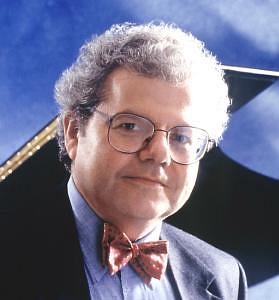 Pianist Emanuel (Manny) Ax is a wonderful piano player who has toured the world, recorded a huge amount of repertoire, and has collaborated with the finest musicians and orchestras. Manny, it turns out, is far from your run of the mill piano virtuoso.

In his 1977 expose on the professional golf tour, Dave Hill compared the personalities and interests of Arnold Palmer and Jack Nicklaus. Palmer, Hill said, would always talk about golf – the latest clubs, the courses he had recently played, nothing but golf. In contrast, Nicklaus likes to discuss many things like fine wines, interesting places to travel, even the marching band of his alma mater Ohio State University where he once dotted the “i” in their script Ohio. In the world of world-class pianists, Emanuel Ax is more like Nicklaus.

A Polish Violinist to a Juilliard Pianist

Perhaps Manny learned flexibility and openness from his parents who had to adapt for both to survive the holocaust.  Then the youngster did not start on piano; he started on violin, eventually studying keyboard with his father who coached in an opera house in Lwow, Poland. It was not until after living in Warsaw and Winnepeg, Canada that the family settled in New York and young Ax began to study at The Juilliard School, just like any other future virtuoso. 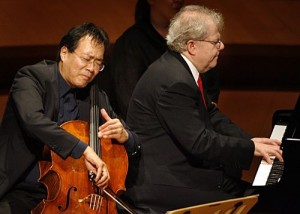 Yo Yo Ma and Emanuel Ax

Now that Ax has made a name for himself as one of a handful of the world’s top pianists, one might think he would stick to a short list of tried-and-true composers  like Mozart, Beethoven, Brahms, Chopin, Tchaikovsky and maybe one or two others. But Manny (just like Jack Nicklaus) would never allow himself to live in such a small world. Although he loves these great composers, he strongly believes a 21st Century musician should also play music from today’s composers. To this end, he has not only played a great deal of music written in the last 50 years, but has asked composers to write new pieces just for him. Pianists in the next 100 years will thank Ax for extending their repertoire.

Although many established pianists are content to live as a soloist, either playing solo recitals or concertos with orchestras, Ax loves to play chamber music and is considered and an outstanding chamber musician. One of his best friends and musical collaborators is the cellist Yo Yo Ma. Together, the two have received three Grammy Awards for Best Chamber Music Performance. Ax has four other Grammys as well. 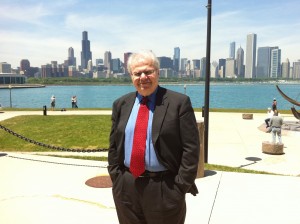 Emanuel Ax in front of the Chicago skyline.

With his expertise in so many facets of music, one would think music was all that Emanuel Ax did. This is certainly not the case with his chameleon-like interests. Studying at Juilliard and honing his keyboard skills probably took all of his time. Well, no. At the same time, he earned a degree in French at Columbia!

An Emmy for a Holocaust Documentary

And there is more (think Nicklaus). While most pianists are content to spend their lives sitting at a Steinway grand piano, Ax was so interested in a 2004 BBC documentary on the Holocaust that he was one of the musical contributors. Add an International Emmy Award to his collection of Grammys.

So what has this remarkable musician has added to his rich life recently? Blogging on his site (emanuelax.wordpress.com). His recent posts on how and when audiences applaud – and don’t applaud – are creating some waves in the world of classical music. They are definitely worth reading.

This article was written in 2009 before Emanuel Ax’s performance with the Greensboro Symphony Orchestra.