Rachmaninoff’s “Symphonic Dances” – A Reflection On His Life 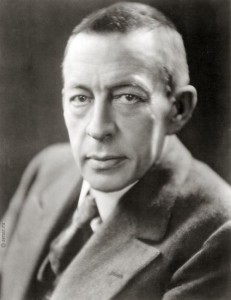 Sometimes a great composer writes their last few pieces knowing that their days are growing short. Beethoven’s late quartets pushed his music far beyond what he had written before. Mahler’s Ninth Symphony is tinged with premonitions of death. Bach’s Art of the Fugue summarized his great contrapuntal skill. And Rachmaninoff made his Symphonic Dances a literal reflection on his long life.

Sergei Vasilievich Rachmaninoff (1873-1943) was one of the last great composers in the Russian Romantic tradition. But when he was 44, he had to leave his beloved homeland because of the revolution of 1917. So where did this iconic Russian composer spend the final 26 years of his life? The United States. 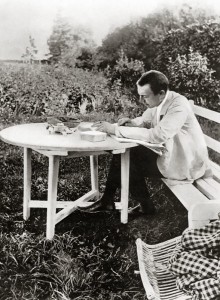 Rachmaninoff working in the outdoors

Towards the end of his life, spent on the north shore of Long Island, Rachmaninoff became rather pensive and looked back at what he had done over the course of his long career. As he knew that his end was approaching, he became attracted to a musical melody that has long been associated with death: the famous “Dies Irae” theme from the Latin Requiem Mass. He used this in his final three works: Variations on a Theme of Paganini, the Third Symphony, and the Symphonic Dances.  Of course, this is the same theme that Saint-Saens used in Danse Macabre and Berlioz used in Symphonie Fantastique.

The Symphonic Dances, the Russian composer’s final work, was actually a reworking of much earlier music.  In 1915, the composer began a ballet score entitled The Scythians. As he was composing it, he showed it to the dancer and choreographer Mikhail Fokine who rejected the music saying that it was not suitable for dancing. A quarter of a century later, Rachmaninoff took the earlier, unfinished ballet music and decided to use it in a different piece.

The “Twilight” of Rachmaninoff’s life? 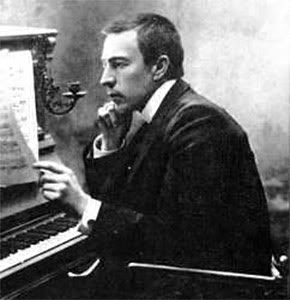 Rachmaninoff looking at one of his compositions

How did Rachmaninoff bring his thoughts about the end of his life into his music? One way is through his movement titles. He initially labeled the movements “Noon”, “Twilight”, and “Midnight”, and many believe that these titles were supposed to represent different periods of his life.

Another way that Rachmaninoff looked back on his life was to use melodies of several of his earlier works in this final composition. He quotes his own First Symphony, for example.

The final chapter of the composer’s life comes out in the third dance, which is truly a struggle between goodness and death. Here, Rachmaninoff juxtaposes an Orthodox chant (“Blessed be the Lord”) with the “Dies Irae”. The uplifting chant eventually wins out and is heard in an exuberant and festive setting to close the piece.

Rachmaninoff was very moved by this music. In the score, he wrote “Hallelujah” under the hymn of praise. At the end of the manuscript, he added “I thank Thee, Lord”. Rachmaninoff’s reflection on his life was positive after all!

A version of this article first appeared in Greensboro, North Carolina’s News and Record on November 4, 2012.