History of the Salzburg Festival 2: Max Reinhardt starts the festival

In Part 1 of this series, we saw how there were several unsuccessful attempts to start a festival in Salzburg. In Part 2, we will learn about Max Reinhardt, and how he finally succeeded in getting the festival off the ground.

Max Reinhardt comes to Salzburg
The Salzburg Festival Hall Society was started in 1917 with the desire of establishing a venue for performances of the festival that was in early planning stages. But at the same time, Max Reinhardt moved to Salzburg, buying and then renovating Schloss Leopoldskron to be his home. The theater director wanted to start his own festival, and felt that summer was the best time to bring visitors to the city and experience the beauty of Salzburg. Reinhardt contacted the Imperial Theater in Vienna and suggested that they erect a new theater away from the activity of the Salzburg on the grounds of Hellbrunn Palace. He also wanted there to be a smaller hall for German Singspiele. 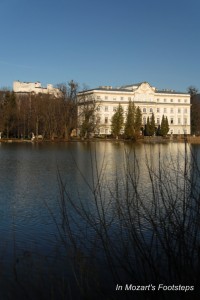 Leopoldskron with the Salzburg Fortress in the background

The plays that Reinhardt wanted to produce were both classic stage works, and theater based on the ancient traditions of Bavaria and Austria. Operas and concerts by Mozart would also be part of this festival, as Reinhardt felt that the combination of theater and Mozart’s music would give the festival a “spiritual unity.”

Hofmannsthal wrote eloquently about how the new festival would restore the status of the Austria of Maria Theresa’s time, even after the collapse of the Austro-Hungarian Empire. This would be done through music and theater, because “in Austria, art is life” as Hofmannsthal wrote. And Salzburg would be its center.

Jedermann, then as now, starts the festival
The plans to build a theater at Hellbrunn were resurrected, but Reinhardt did not want to wait for the new building to be constructed. His first idea was to produce a modern setting of nativity play in a Salzburg church in December 1919, but poor weather and travel conditions forced this to be cancelled. Then he proposed staging Hofmannsthal’s version of Jedermann the following summer when the weather would be better. A few years earlier, Reinhardt’s production of Jedermann play in Berlin was a great success. The summer production was to be in the Felsenreitschule, but Reinhardt changed his mind to hold it in front of the Cathedral, a very important decision for the future of the festival. 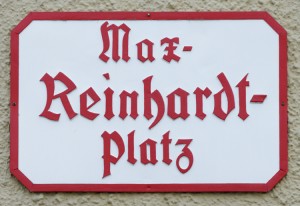 Jedermann was performed on August 22, 1920. Some of the audience sat on hard wooden benches, and others stood, some far enough away to hardly hear a word of what was happening on the outdoor stage.  It was an overcast day, and legend has it that the sun came out in the middle of the performance, almost as if it were in the script. The production was repeated a week later exclusively for citizens of Salzburg.

The first Salzburg Festival was two performances of Jedermann. The operas and concerts would come later.

In Part 3 of this series, we will learn about the first years of the festival, and how it was not an immediate success.