History of Salzburg Festival 1: Failed attempts to start a festival

The Salzburg Festival is one of the pre-eminent annual music festivals in the world. For about six week each summer, the finest conductors, singers, instrumentalists, orchestras, and actors make Salzburg their home as they present wonderful performances. Here is a series of five short articles that tell the story of how this festival came to be. 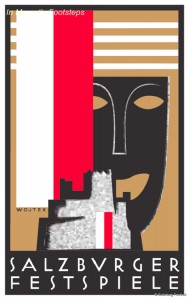 Imitating Bayreuth and Wagner
The idea for a festival in Salzburg started in the 1800’s. Starting in 1876, the annual Bayreuth Festival performed Richard Wagner’s operas, and many people felt that Salzburg should have a similar celebration dedicated to Mozart’s music. In 1877, Hans Richter, who had conducted at Bayreuth for the first festival there, brought the Vienna Philharmonic to Salzburg for three concerts of Mozart. Although these concerts were neither well received nor financially successful, it established the link between performances of Mozart and Salzburg. This, as we shall see, turned out to be very important.

In that same year, 1877, Professor Karl Demel proposed building a concert hall on the Mönchsberg where Mozart’s operas would be staged. Again, this was to be similar to the Festspielhaus in Bayreuth. Architectural plans were made, but politicians and business leaders from Salzburg and Vienna were not very interested in the project. Demel finally abandoned his idea in 1891.

Early 20th century attempts
At the turn of the 20th century, interest in creating a festival started again. In 1903, Max Reinhardt and Hermann Baur wanted to establish Salzburg as one of the musical centers of Europe, and in 1905, they suggested that a theater and opera festival be formed in Salzburg. Reinhardt was a successful and influential theatrical director and manager who was known for introducing new ideas into German theater. Although they could not raise the money for either project, the idea for a festival in Salzburg was planted in Reinhardt’s head.

Another attempt to start a festival that did not succeed was in 1906. Lilli Lehmann, a great soprano from Berlin who had been active in raising the funds to build the Mozarteum, staged a Mozart festival in Salzburg with the Vienna Philharmonic. The three Da Ponte operas were staged and featured Gustav Mahler and Richard Strauss as conductors. Even the strength of these performances was not enough to build momentum to start a festival. 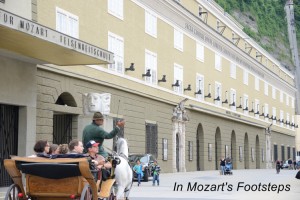 The front of the Salzburg Festival houses today

Music for a “Rich and Elegant Public” or for Beer Drinkers?
The next suggestion for a festival theater came in 1913 when Friedrich Gehmacher and Heinrich Damisch, two amateur music lovers, suggested that idea to the Mozarteum. Gehmacher was skilled in fund raising, and saw the financial benefit for the city. He said, “I think if is superfluous to point out what enormous economic effect the Salzburg Festival would have,” and that it would bring “a rich and elegant public” to Salzburg.

This new festival hall was to be located near Maria Plain, a magnificent Baroque church that overlooks Salzburg from the north. Still, some people did not like this idea, and even the leaders of the Mozarteum were opposed to such a refined festival because they thought that some of their supporters were simple “Biertischgrossen” (overweight beer drinkers). Gehmacher and Damisch finally took matters into their own hands and established the Salzburg Festival Hall Society in Vienna with a parallel organization in Salzburg. But by this time, 1917, the price of the land near Maria Plain had increased and beyond what the new society could afford.

In Part 2 of this series, we will learn about Max Reinhardt, along with his friends Hugo von Hofmannsthal and Richard Strauss, were successful in getting the Salzburg Festival started.