Julie Albers has led a remarkable life as a cellist, having performed around the world by the time she was just 21. And all of this started in small town of Longmont, Colorado.

The Albers family was quite musical, so when Julie was born in 1980, her mother was already thinking about the instrument to teach her daughter. This turned out to be violin, which Julie started when she was two. By the time she was four, she had switched to cello, the instrument she would master and be her life’s musical focus. 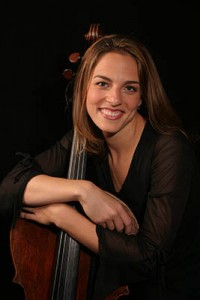 Following the orchestral debut, Julie performed in recital and with orchestras in the U.S., Europe, Korea, Taiwan and New Zealand. In her early twenties, she was successful in several important international competitions. In Germany, she won second prize in in Munich’s Internationalen Musikwettbewerbes der ARD, and was also awarded the Wilhelm-Weichsler-Musikpreis der Stadt Osnabruch . And in 2003, she was named the first Gold Medal Laureate of South Korea’s Gyeongnam International Music Competition, winning the $25,000 Grand Prize. While Julie was in Germany for the first competiton, she recorded solo and chamber music of Kodaly for the Bavarian Radio, performances that have been heard throughout Europe.

Back in North America, Julie has performed with many important orchestras and ensembles. In 2009, her engagements included performances with the Florida Orchestra, and the Utah, Vancouver, San Diego, Edmonton, Memphis, Syracuse, West Virginia, Santa Rosa, Brevard and Fairfax Symphony Orchestras. She also performed in recital at the University of Wyoming, Laramie, where ex-Greensboro Symphony Orchestra concertmaster John Fadial teaches. 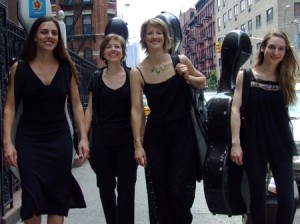 Julie (left) with members of CELLO

In addition to solo performances, Julie is an active chamber musician. She has had a two-year residency with the Chamber Music Society of Lincoln Center, and performs with a cello quartet appropriately named CELLO. She is also a Distinguished Artist of the McDuffie Center for Strings at Mercer University. Her debut album on the Artek label was released in 2005, and includes works by Rachmaninoff, Beethoven, Schumann, Massenet, and Piatagorsky.

Returning to what I wrote earlier, it may be been an understatement to say that Julie was born into a musical family. Julie has two equally talented string-playing sisters. Violinist Laura is the Associate Concertmaster of the San Francisco Opera and studied at the Cleveland Institute and The Juilliard School. Violist Rebecca was just hired as the Associate Concertmaster of the Minnesota Orchestra, and also studied at The Juilliard School. Together the sisters perform as the Albers Trio.

And it all started in Longmont, Colorado.

This article originally appeared in Greensboro, North Carolina’s News and Record on October 10, 2010.