Victor Vanacore and the Symphonic Pops

Victor Vanacore has made a career of arranging and conducting the best known pop and rock hits. When he leads the Greensboro Symphony Orchestra in the upcoming Rock at the Pops Concert, it will be an evening of Elvis Presley, Motown, Bee Gees, Earth, Wind, and Fire, Gloria Estefan, and, of course, the Beatles. He has also performed with some of music’s greatest superstars, and will conduct their music at the concert as well. And none is more famous than Michael Jackson. In a recent conversation, Victor told me about how he met the King of Pop.

“I had a job as a session player at Motown. One day, between recording sessions, Michael heard me play piano and asked if I was reading the music or improvising. When he learned that I was reading it, he asked if I would audition for him, and he asked me to sight read the overture for their new show. He liked the way I played, asked if I also played organ (I did) and offered me the job to play with his band. This was after they had already recorded songs like “A,B,C” and “I Want You Back”, and I played those hits many times with the Jacksons on tour. You can say I know those tunes well!” And this is the first-hand knowledge that makes Vanacore’s orchestral arrangements so good.

Those at the concert will have the opportunity to view and actually take home a rare photograph of Michael Jackson and his entire family. Victor continues, “I’ll be bringing photos of Michael with me to Greensboro, which I’ve never done before. I even took a photo off my wall that had never been published and will offer it for sale in Greensboro with half the proceeds going to Children’s Home Society of North Carolina. The photo is of the whole Jackson Family and me in the Rose Garden of the White House.” With the myriad of Jackson memorabilia floating around these days, such a photo might turn into a rare and valuable collector’s item.

Who else has Victor worked with? Barry Manilow for one. In fact, he toured with Manilow for six years. He also worked with Ray Charles for thirteen years, and was the great singer’s opening act for the final three years of Charles’s life. “My version of Elton John’s ‘Sorry Seems To Be The Hardest Word’ was the last arrangement that Ray Charles ever sang. I did it for his album ‘“Genius Loves Company’, and he passed away just a couple of months after we recorded it.” 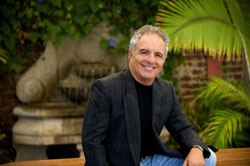 It was Ray Charles who first suggested that Victor make these orchestral arrangements. “I got the idea of symphony Pops when I was working with Ray. We were doing a lot of symphony gigs and he asked me one time if I’d like to do some arrangements and open for his show.” Since then, Vanacore has made a huge name for himself with his arrangements. When I asked him what he liked about this music, he was passionate in his reply.

The Glory of Orchestral Strings

“Having an orchestra play these pops arrangements sounds glorious. When you add live strings to a tune, it presents the orchestra in a totally different light. With a concert like this, some audience members may have only listened to music on an iPod, but when they hear Gloria Estefan, Earth, Wind and Fire, or the Beatles with full set of orchestral instruments, it’s enchanting. They can hear a beautiful melody played by English horn or bassoon, and this is new and wonderful for them. I like that these pops concert can bring the orchestra to a large audience.”

Joining the Victor and the orchestra will be Tony Galla and Alexx Daye, two of Hollywood’s most sought-after singers. Vanacore concludes, “The orchestra is always featured in all of my shows. And having two great singers just makes it even better.”

This article first appeared in Greensboro, North Carolina’s News and Record on November 7, 2010.