The Story of Silent Night – Spreading the Hymn to the World

How Silent Night spread to the rest of the world is an interesting story by itself. In 1819, the master organ builder Karl Mauracher came to St. Nicholas Church to work on the organ. (Perhaps this is why some have thought the organ was not functioning on Christmas Eve, but we don’t know this for sure.) When he left, he probably took the first copy of Silent Night with him when he returned to his home in the Zillertal (near Innsbruck).

Outside of Oberndorf, the music found its way to two musical families: the Rainer’s and the Strasser’s. The Rainer’s sang it on Christmas Eve 1819 in their church in Fügen, and three years later performed it for Tsar Alexander I of Russia and Emperor Franz I of Austria. They also gave the first performance of Silent Night in the United States outside of Trinity Church in New York in 1839. The Strasser’s were a family of glove makers who were also fine singers. Each year, they traveled to German fairs to sell their gloves and often sang to entertain the shoppers. A Leipzig newspaper reported that the Strasser’s sang Silent Night at one of these fairs in 1832. 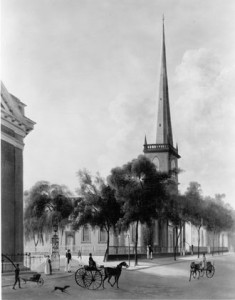 Trinity Church in New York. This drawing is of the church that was standing in 1839. The church that stands today was consecrated in 1846.

By the middle of the 1800’s, the music was well known and well loved, but its authorship was unknown. To determine who actually created this hymn, the Royal Prussian Court Chapel in Berlin contacted the Benedictine Monastery in Salzburg to ask who might have written Silent Night. In 1854, word of this got to Franz Gruber, and he wrote a two-page document entitled the Authentic Reason for the Composition of the Christmas Song ‘Silent Night, Holy Night’. (Click here to read.) In it, Gruber presented a brief history of the origins of the work and named himself and Mohr as its creators.

Following their collaboration in 1818, the Mohr and Gruber went their separate ways. Gruber continued to serve as organist for St. Nicholas Church and as teacher in Arnsdorf until 1829, when he moved to Berndorf to serve in a similar capacity. It was not until 1835 that he fulfilled his career dream of being solely a musician when he became the choir director, singer, and organist for the parish church in Hallein. He lived there until his death in 1863. 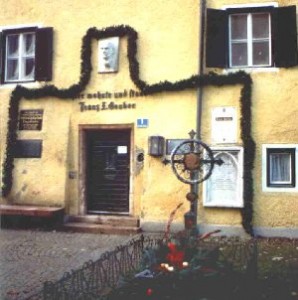 Gruber's grave and museum in Hallein

Mohr left Oberndorf in 1819 and then worked in a number of churches. His longest positions were in Hintersee (ten years) and Wagrain (eleven years), where he died in 1848.

next: Franz Gruber’s Verification of who wrote ‘Silent Night”
previous: The Origin of the Hymn