Benny Goodman, “The King of Swing”, is one of the most important figures in jazz.  A strange fact of music history is that we probably would not even know the great clarinetist’s name today if it were not for a real quirk of fate: it was a three-hour difference in time zones that changed Goodman’s career.

Goodman was born into a poor Jewish family in 1909 in Chicago. He made the musicians’ union at age 14 and was soon playing all over the Windy City. After a stint in California, he came to New York City in the early 1930’s and made a name for himself there as a virtuoso clarinet player. 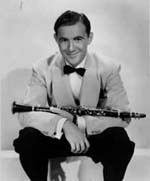 In 1934, NBC studios offered Goodman a contract to host their radio show, “Let’s Dance”. It was broadcast nationwide live on Saturday nights from 11 p.m. until 2 a.m. For the first two hours, Benny played music that was fairly conservative and easy to dance to, but for the third hour, he played his own music, a newer kind of music which would later become known as “Swing”. The radio audience did not like this new swing music as much as the more traditional dance music, but NBC allowed Goodman to play it because of the late hour.

Goodman did “Let’s Dance” from December 1934 to May 1935, and then decided to take his band on a national tour. That the tour began poorly was an understatement. His first venue, the Roosevelt Hotel in New York, fired Benny after one night. The hotel’s management was conservative and the audience wanted Guy Lombardo-style dance music, not the “new fangled” music that Goodman played. The next stops heading west did not go much better. The concert promoters even tried to cancel the tour after a performance in Denver. Goodman was not attracting much of an audience, and those in the audience did not like what he played. His career was almost finished. 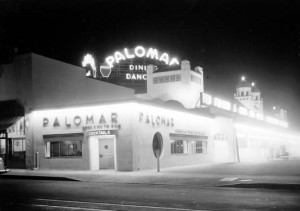 The Palomar Ballroom in Hollywood

By the time they got to California, Goodman and his band were fatigued and discouraged from the poor reception they had been receiving. For their first concert at the Palomar Ballroom in Hollywood, Benny and his band decided to play it safe by performing some older-style dance arrangements that he has just purchased. But the California crowd seemed indifferent to this conservative music.

After the first set, the band did not know what to do because this audience did not even like the older dance music. Finally, drummer Gene Krupa said to the band leader, “If we’re gonna die, Benny, let’s die playing our own thing”. So they brought out the newer swing music that most of the previous audiences had hated.

The young crowd loved what they heard and lively dancing began. When trumpeter Bunny Berigan played his solos on tunes like “Sometimes I’m Happy” and “King Porter Stomp”, the audience cheered. They even approached the bandstand just to watch the band play this new music. At last, Benny Goodman had found the right audience for his music. The date was August 21, 1935, and most people call this day “The Birth of the Swing Era.” 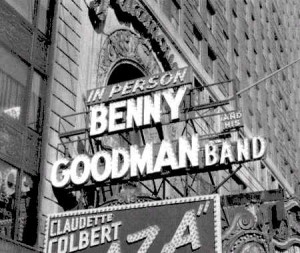 Goodman's name on the marquee of the Paramont Theater in 1937, after his career had taken off.

What no one had realized up to then was that most of the audiences for the Goodman’s radio show were in the Eastern and Central Time Zones, and had only heard the first two hours of “conservative” music. But because “Let’s Dance” was broadcast live to a nationwide audience, the 1 a.m. hour when Benny played his newer “swing” music in New York was actually 10 p.m. on the West Coast, prime listening time for California music fans. And not only did the California radio listeners hear the final hour of “Let’s Dance”, but a local disc jockey liked swing and had been playing the clarinetist’s music on his radio show. When Goodman arrived in Los Angeles, there was an audience that was just waiting to hear him play.

The “Swing Era” had now started and “The King of Swing” had just been crowned. Without a three-hour time difference, we might not even know Benny Goodman’s name today.

A version of this originally appeared in Greensboro, North Carolina’s News and Record on December 19, 2010.