When Dave Bennett brings his clarinet to play Benny Goodman’s music with the Greensboro Symphony on New Year’s Eve, it won’t be the first time the orchestra has played the music of the “King of Swing” in a Pops Concert. Almost thirty years ago Goodman himself came to Greensboro to play with the Symphony. Bernie Mann, publisher of Our State Magazine, met with the jazz master at the time, and sat down with me last week to talk about Goodman, how the concert came to be, and the history of the orchestra’s pops concerts. 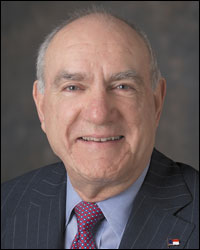 Birth of the Pops Concerts

“I used to be in the radio business and owned radio stations. Our stations played what was then called Beautiful Music, music by a large orchestra with high quality sound. I was also active with the symphony. One day I went to them and suggested starting a pops series that my radio stations would underwrite. I told the symphony that if they made any money, they would keep it, and if they lost any money, I’d pay for it. So it was hard for them to say no!

“After we did this for couple of years, we wondered how we could do something really big, and decided to book some top-flight artists to bring in. One of the first marquee names we tried to book was Benny Goodman, and we succeeded.”

The Pops concerts had been at the Carolina Theater and other concert venues in town. But for the performance of one of the all-time greats of jazz, the orchestra decided to create a different mood. They held the concert at the Greensboro Coliseum, arranged dozens of tables on the floor, and established a cabaret atmosphere similar to the concerts of the Boston Pops. 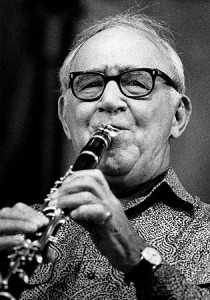 Benny Goodman towards the end of his career

When I asked Mr. Mann about the concert, his eyes lit up. “The concert was wonderful. We had a big crowd and people enjoyed hearing him. Of course, many were there to be able to say that they heard Benny Goodman in person. He was still playing well, with great skill and with the ability to perform the full range of the things he wanted to.

“He played some of his own repertory and some of the great tunes from the Swing Era. The concert had Glenn Miller and standard Goodman tunes like ‘Sing, Sing, Sing’. It was the music of his idiom that he was known for and that people wanted to hear.”

Lunch with the “King of Swing”

When a soloist comes to play with an orchestra, they usually arrive a day or so early to rehearse, and this is how Mann got to meet Benny Goodman. “The orchestra needed someone to take him to lunch, so I was nominated. We ate at the Starmount Forest Country Club.”

One might expect that a person as famous as the ‘King of Swing’ would have a commanding presence and become the center of attention wherever he went. That was hardly the case. “He was a very low-key, unassuming kind of man. If he walked in here now, unless you really knew who he was, you might think he was the mail man or a UPS guy. The great clarinetist had no airs or big ego. He was just a very pleasant person, and was so gracious to me.

“It was such an interesting situation because he was so unimposing for being a man who had such a varied background, done so many things, and met so many people. Goodman had numerous stories he could regale someone with, and yet he was more interested in talking about his house and the things he enjoyed doing. I found myself wondering if should have asked him more about his involvement with Gershwin, Paul Whiteman, and so many other famous   people he knew and worked with during his long career.” But Benny Goodman just wanted to talk about the same things that a regular person would.”

This article originally appeared in Greensboro, North Carolina’s News and Record on December 26, 2010.