National Public Radio recently had a story on a scientist from the University of Maryland who studied the movement of violin bows in an orchestra as they related to the motion of a conductor’s baton. The result of the study was that the violinists’ bows did indeed move in conjunction with the conductor’s baton. 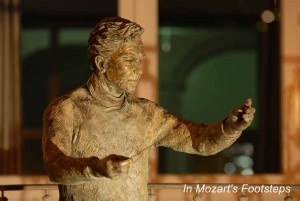 Herbert von Karajan was one of the greatest conductors of the 20th century. This statue of him is outside of his birth house in Salzburg.

This whole discussion got me thinking about ensembles that are “conductorless”. Chamber musicians never use a conductor – well, sometimes they do if a piece of music is exceptionally complex. There are also chamber orchestras that perform without a conductor, and these ensembles are what I want to address here.

A talented group of musicians can play certain pieces of orchestral music without a conductor extremely well. Look at the Orpheus Chamber Orchestra. This ensemble of about thirty instrumentalists gives wonderful performances without a conductor. 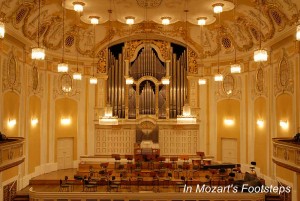 The stage is set for an orchestral rehearsal or performance. Note the podium and conductor’s stand.

In one of the trips I recently led to Vienna, I took my guests to a concert of the Vienna Virtuosi, a conductorless chamber orchestra comprised of some of that city’s finest musicians. The concert was spectacular.

It is one thing for a small orchestra to start and stop, and stay together without a conductor, but it is another thing for them to give a refined interpretation. The Orpheus and Vienna ensembles did this very well, but I have also heard many performances “sans conductor” where there was no unified concept of how the piece should go. Going along with this is often bad balance between the sections of the orchestra because there was no conductor listening to the “big picture” of the sound and telling some musicians to play softer and others to play louder.

The recent research on how the string players’ bows follow the conductor’s baton only describes one aspect of the conductor/orchestra relationship. Frankly, this is very elementary. What we really need is research showing how a conductor affects the music making and balance of an orchestra.

But then, we can just use our ears to tell us the same thing.